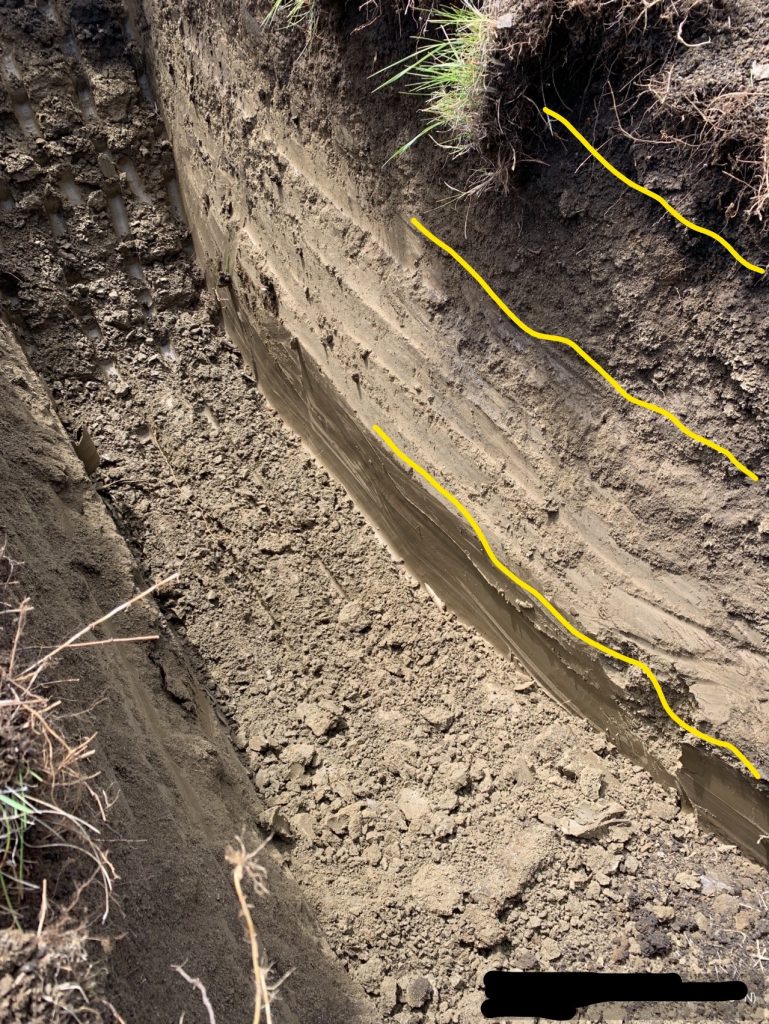 DIGGING TEST PITS IS WHERE IT ALL STARTS

As you have probably already figured out, septic systems are a little more complicated than what they were just 10 or 20 years ago.

Regulations for Private Sewage in Alberta go through a code cycle approx every 5 years … and with each code cycle there are changes.  2009 code cycle, for example, was a big one.  Septic tank size requirements, for example, grew tremendously almost overnight.

One thing that is consistent is that every code cycle continues to place a focus on making sure we know what the onsite soils are saying on each lot.

Old-school septic installers used to use 100ft of trench for every bedroom as a way to size the septic field.  That meant a 4 bedroom home got 400ft of trench, without ever looking at the soils.  It could be clay or gravel.

Next generation installers started using “perc” tests, which was a step up from no soil testing at all.  Essentially a perc test was a hole that was dug, filled with a column of water, and then timed to see how long it took for water to drop and enter the soil.  The problem was that perc tests weren’t reliable and many times the results couldn’t be reproduced.

And “smart” soil testers loved to find gopher holes and do their perc tests there because it showed up as such a great percolation rate!

And now here we are.  Current regulations require that we complete at least 2 soil investigations as part of a certified septic system design .  At least one must be an excavated test pit, and the other can be a bore hole sample.  But most designers simply just do two test pits (it doesn’t make sense to bring out a bore sampling truck when you’ve already got an excavator or backhoe onsite).

Once inside the test pit, we are looking for a restrictive layer, which can be any number of things.  It can be a layer with very poor permeability (such as heavy clay), poor structure, bedrock, sandstone etc.  It can also be a layer such as gravel (as this actually allows the effluent to pass through too fast, and hence no treatment happens).  A water table (groundwater) is also considered a restrictive layer.

Regulations require that the point of discharge of the effluent (for example, the bottom of the trench) maintains a minimum vertical separation from any restrictive layer.  It depends on the quality of effluent, but it is normally either 3ft or 5ft.

For example, if we have a trench that is 3ft deep, and if we needed a 5ft vertical separation, we would need to have “good” soil (no restrictive layers) within 8ft of the surface. 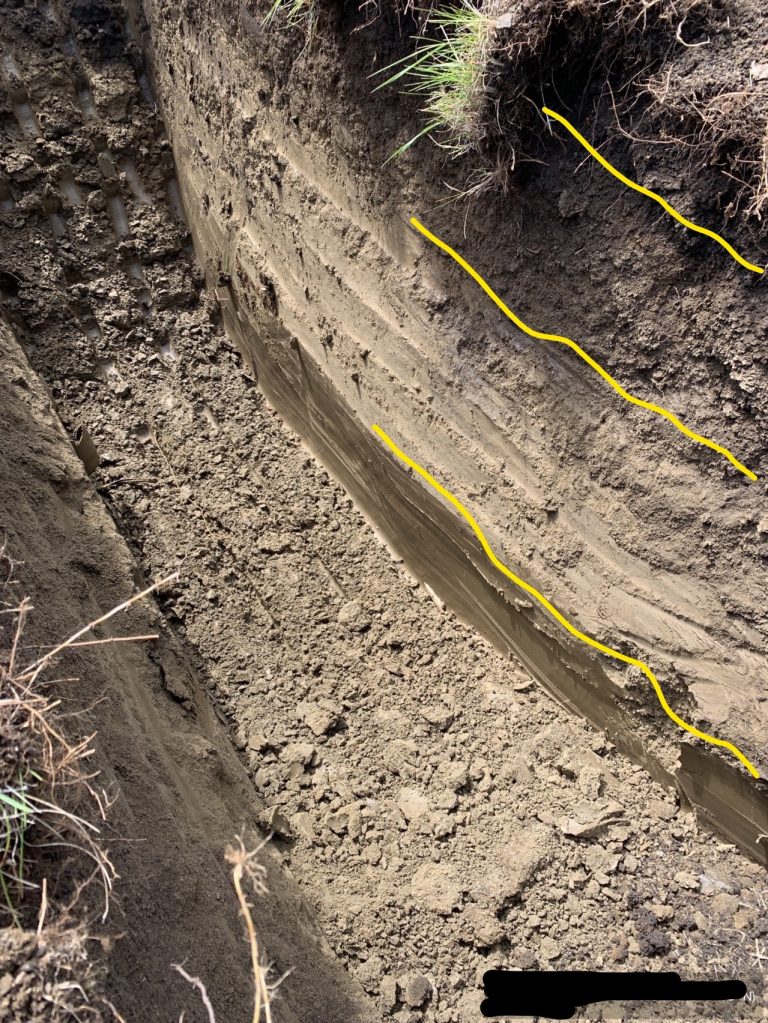 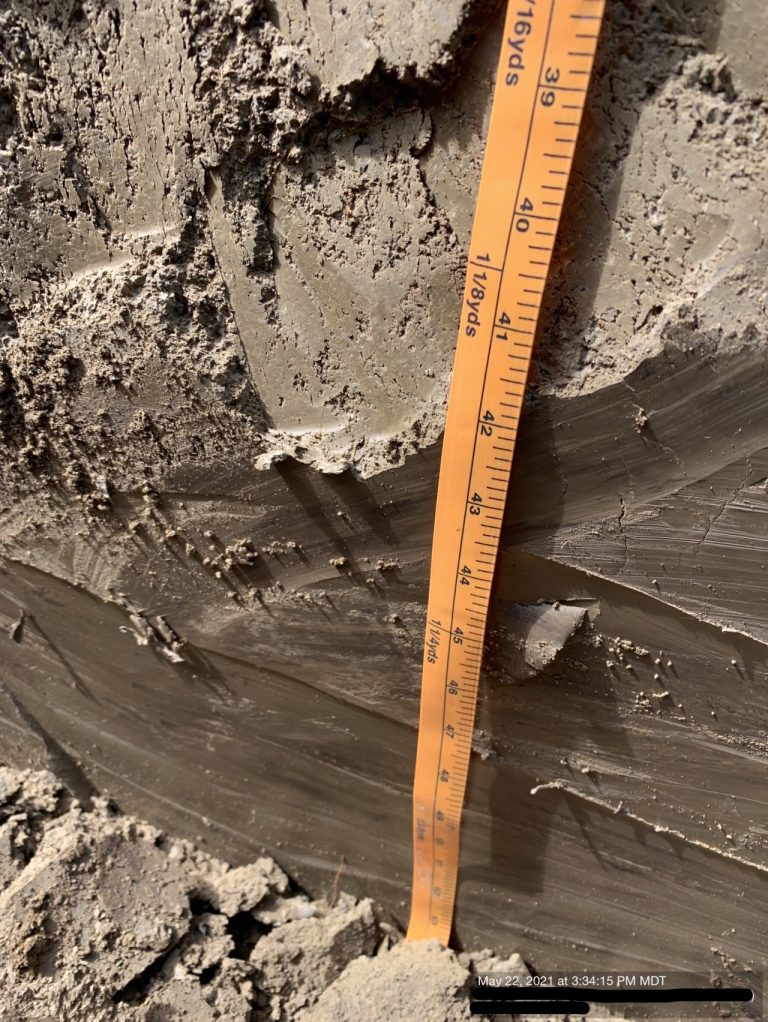 In the first image, you can see the different horizons (or layers) of soil as we progress down from the surface.  Each layer contains different soil characteristics.

It’s easy to see that the layer near the bottom of the test pit is very restrictive;  applying water or effluent to this layer wouldn’t go well.

The second image is a little closer up and shows that the restrictive layer starts around 42″ from the surface.

Because of the shallow restrictive layer, this lot most likely would not qualify for the option of a buried treatment field (with trenches) because we wouldn’t be able to maintain either a 3ft nor a 5 ft vertical separation from the bottom of a trench.  A treatment mound would most likely be the best option here.

Have you ever been in a test pit, or seen similar soils on your property?  If you are building your home and have started digging the hole for your basement, have a quick look at the walls of the hole and you might start to see the layers!

[VIDEO:]  A quick look at how we dig our test pits.  We try to disturb the least amount of area as possible.  The test pits need to be dug near where the septic system will eventually be situated.  The pits are always filled back in before we leave.