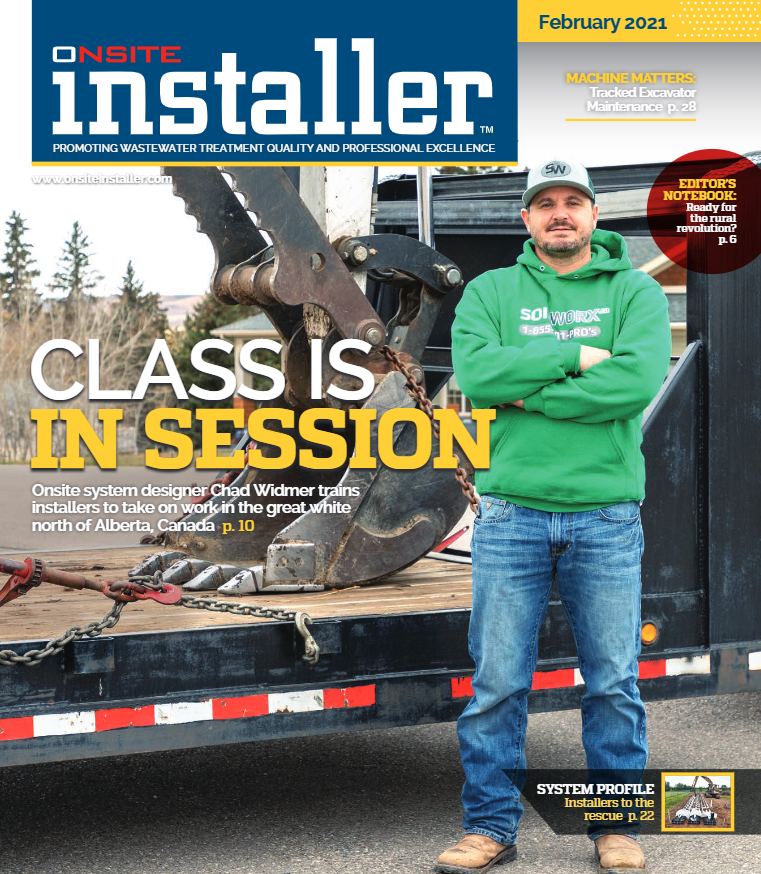 Onsite Installer is one of the industry’s largest print and online magazine in USA and Canada.  As an active reader, I was more than excited when they reached out to me for a feature story in the February 2021 edition.

Here are some excerpts from the article, which you can read the full article by clicking here:

”  For the Owner of Soilworx, Teaching Proper Septic System Construction and Usage is the Name of the Game

Chad Widmer enjoys a good challenge. And as a designer of septic systems, the owner of Soilworx — based in Okotoks, Alberta — runs across his fair share. Like huge homes built on tiny lots, where space for a system is an afterthought. Or a system for a business with unusual waste products. Or developing a creative disposal solution for a local zoo.

As if that’s not enough, Widmer also runs a private mentorship program in which he works with newly licensed contractors, walking them through their first couple of installations.

“Some guys take the course and get certified, but then never put a system in the ground,” Widmer explains. “The certification doesn’t teach you how to dig a hole or lay pipe.

“So I work with guys that need a little extra help,” he says “I help them dig their first test pits, do the soil work, critique their designs and so forth.”

Does Widmer enjoy the variety of duties? “You bet, especially the projects that are a little outside the run-of-the-mill,” he says.

“Sometimes I’m the second or third designer on a project because other designers said there’s no solution except for holding tanks,” he continues. “But in all those cases, I came up with solutions … you just have to be more creative.

“I tell clients that there’s always a solution, but sometimes it requires a bit more money and some compromises. But it’s always fun — I enjoy it.”

Established in 2004, Soilworx primarily designs systems for homes and small businesses. Widmer already was familiar with the industry, having worked for his father, a system installer, during summers while in high school.

From there, Widmer took a somewhat circuitous route to his current career. After earning a private pilot’s license when he was in high school, he moved to Florida for training to become a commercial airline pilot.

Around 2000, Widmer was hired by Ameriflight, a commercial-cargo airline. He handled UPS deliveries to smaller towns and airports in western states. But then fate intervened in the form of the 9/11 terrorist attacks, which devastated the airline industry.

“That pretty much squashed any chances of a young pilot going anywhere anytime soon,” Widmer says.

After bouncing around from job to job for a while, he heard that the Alberta Onsite Wastewater Management Association was looking for people interested in becoming certified designers and installers of septic systems.

“I always was interested in architecture, so when I heard the words ‘engineered designs of septic systems,’ it definitely got me interested,” he says. “So I jumped in with both feet and the rest is history.”

At this point, Widmer does only one or two installations year. To that end, the company owns a Bobcat E45 mini-excavator and skid-steer and a Caterpillar skid-steer. Designing systems for customers in central and southern Alberta now accounts for about 75% of the company’s revenue; training, which Widmer started doing in 2105 after receiving AOWMA certification, generates the balance, he says.

Widmer periodically has to contend with large homes built on relatively small, 1- to 1-1/2-acre lots in outlying communities around Calgary (about 25 miles north of Okotoks) and Edmonton (about 185 miles north of Calgary), Alberta’s two biggest cities.

Those areas attract professional athletes, oil executives and other wealthy businessmen who want to live near, but not in, big cities. They also want large homes, even though the lots are small, Widmer says.

“Sometimes you’ll see a nine-bedroom home on a 1-1/2-acre lot with a detached garage that needs a private sewage system,” he says. “Unfortunately, sometimes I’m the last guy that gets called … so I’m left with a 20- by 20-foot area for a septic system.

“I do a ton of work on challenging lots, where you have to get very creative with design work,” he adds. “In theory, they should consult with someone about septic systems before any construction even starts.”

Because homeowners aren’t very happy when they learn their only option is a holding tank that might need pumping twice a month, Widmer says architects and home-builders for the last few years have been more conscious about holding a site meeting prior to breaking ground. The permitting process for builders is supposed to require plans for private sewage systems, but Widmer says that for whatever reason, it sometimes “slips through the cracks.”

“It’s a learning curve,” he says. “But most builders that do it once don’t do it again.”

Changing the mindset of builders and architects requires educating them whenever possible about the need to leave a sufficient area of undisturbed soil for a septic system, as well as help them understand sizing requirements for systems, he adds.

So how does Widmer design septic systems on lots with limited space? Reverse engineering seems to work best, he says.

For example, says there’s a four-bedroom home that will generate 450 gallons of sewage per day at peak flow, but there’s only space for a system that can handle 350 gallons a day. Widmer uses controls that limit septage discharge to 350 gallons in the main system, then adds a second tank to the system to handle the remaining 100 gallons of overflow septage.

“The system is programmed to pump out only 350 gallons each day until the tank is empty,” he explains. “If the system is continually over-used, the extra flows are collected in the extra tank. And when that extra tank fills up, an alarm goes off. Then the homeowner must either call a pumper to clean the tank or drastically reduce the flows until the system can catch up.”

If there’s no room for an extra tank, Widmer says he tries to use deeper, taller tanks instead of shallow and more elongated tanks. In extreme cases, holding tanks are the only options, he says.

Designing systems for businesses also can pose unusual challenges. In one case, Widmer was asked to create a system for a veterinarian clinic in a town south of Calgary.

“It was tricky because of the chemicals and the animal blood that goes down the drain at a business like that,” he explains. “Blood is a nightmare to treat — it’s so strong it’s almost untreatable.

“But I made it not tricky by designing a separate pipe system for the drains in the surgical rooms, with those pipes draining into a separate holding tank,” he continues. “The rest of the waste is treated by an advanced (aerobic) system coupled with a sand-treatment mound.” 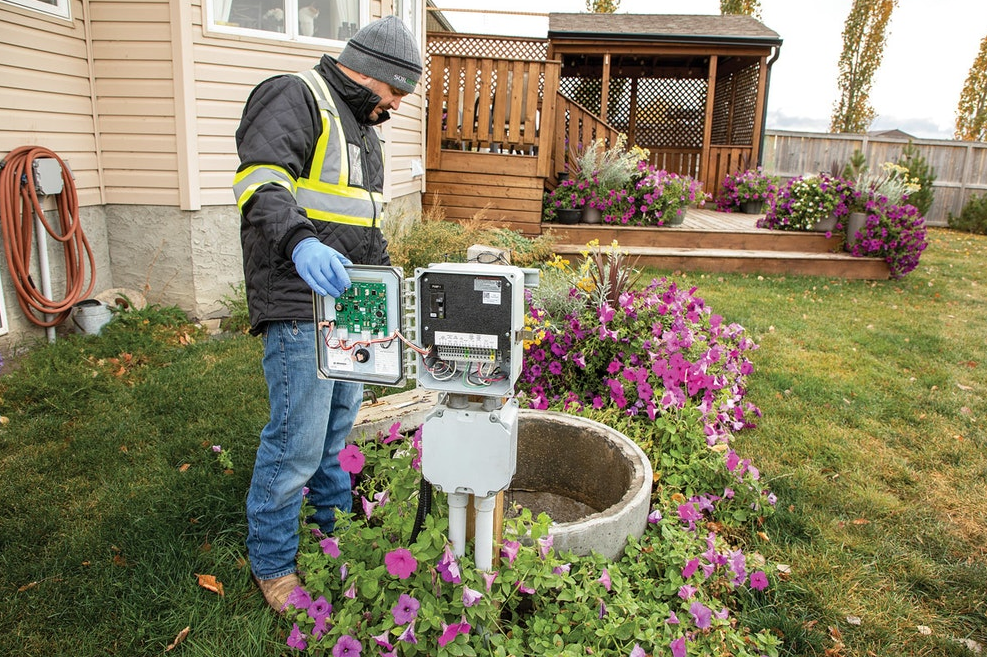 Widmer primarily designs sand-treatment mound systems, which typically are the most economical solution for the kind of site and soil conditions common to the area. “We see a lot of shallow, restrictive layers within the first five feet of soil around here,” Widmer says.

“Before 2015, LFH at-grade systems were only allowed if you received special permission from a permitting authority,” he says.

In central and southern Alberta, only one county requires advanced systems. In Canada, the provincial governments develop their own guidelines and regulations for septic systems. But counties within the province are allowed to require more stringent standards as they see fit, Widmer says.

“Homeowners are concerned about the price of systems, so advanced systems — which can cost about $10,000 more than a more conventional system — aren’t as common unless required,” he explains. “But it’s always a conversation we have.

“I explain that with an advanced system, they get a higher level of treatment, along with the benefits of a smaller field system. Some homeowners like the environmental side of it, some like the bragging rights of having one and some simply think it’s great, but they can’t spend the extra money on one.”

Widmer also sees a trend emerging toward pressurized systems instead of gravity systems because they’re more efficient. They also help leachfields last longer because they distribute water farther into the drainfield instead of overloading the first 10 or 15 feet of a trench, he says.

“With gravity systems, effluent usually doesn’t make it to the end of a trench, so you need to rely on a biomat forming to slow down infiltration,” he says. “Also, when it comes to challenging lots, pressurized systems provide more design flexibility because they can use smaller leachfields.

“The only gravity systems I design now have a lot of acreage with good soil,” he points out. “But those kinds of sites are becoming more and more rare.”

Over the years, training for system design and installation has become a bigger part of the company’s focus. Widmer says he typically trains about 50 to 60 people a year in classes held in Edmonton and Calgary.

Training takes two weeks and enrollment tends to be somewhat cyclical, oddly enough depending on the health of Alberta’s oil industry.

“We’re in kind of a weird bubble here,” he explains. “Whenever there’s a downturn in oil prices, our class sizes go up because a lot of people come in from the oil fields. The bad part is when oil prices pick up again, those guys disappear.

“As a result, there definitely are some issues in the private-sewage industry here with new installers putting in one or two systems, then they’re nowhere to be found later that because they’re back working on a rig somewhere. So there’s a lot of volatility in this industry.”

The COVID-19 pandemic has forced Widmer to teach training classes remotely via Zoom video-conferencing. Learning how to teach remotely was somewhat of a challenge because there wasn’t much time to adapt, but Widmer says it’s now working fine.

“I’m fairly techy, so it wasn’t a huge deal for me,” he says. And on the plus side, Widmer points out that remote instruction saves him the time and expenses associated with traveling to Edmonton and Calgary several times a year.

“It’s also saving students a lot of money,” he adds. “They come in from all over the province and normally would have to either fly in or perhaps drive eight hours or more, plus pay for hotel rooms.”    “ 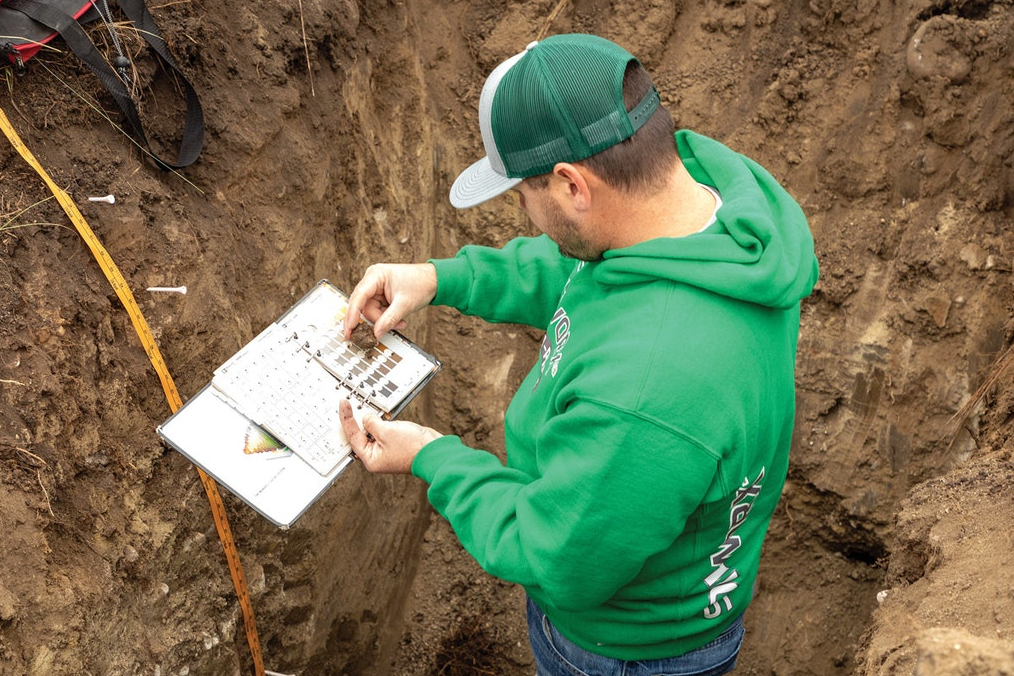