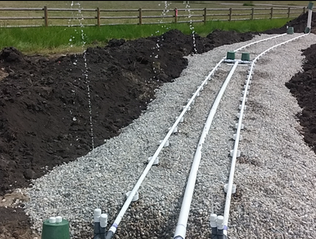 Most people are familiar with the conventional gravity-type distribution system. This is where the underground treatment field is fed using gravity. Basically the septic tank “flushes” once it reaches a certain level and that dose works its way into the field through a series of sloped 4″ drainline pipe.

PRO’s of a gravity system: relatively low maintenance, no energy use, no moving parts

CON’s of a gravity system: does not provide equal distribution across the entire treatment area; causes “hydraulic overloading” in the soils, which can shorten the life of your treatment field.

In pressure distribution, every time the pump turns on, effluent is distributed over the entire area (space) system. This avoids having areas within the system where effluent is not treated as well until the biomat forms and restricts flow through the soil. In gravity systems we rely on the formation of the biomat to form over time, providing the distribution of effluent and helping in the treatment processes. In fine textured soils with cracks, effluent can penetrate deep into the soil until the biomat forms, shutting off those flow routes.

With equal distribution this problem is avoided across the entire area from day one. If effluent moves through too quickly in sandy, coarse-textured soils, treatment will not occur. Using pressure distribution helps control the rate of water movement through the soil, which allows the time for treatment to take place.

Uniform distribution is achieved through a pressure distribution system. The systems are designed so the volume of septic tank effluent flowing out of each hole of the distribution piping (laterals) is nearly identical. Pipe diameters and hole diameters must be carefully sized to achieve this distribution.

A conventional pressure distribution system such as those found in a mound, at-grade or shallow trench system consists of five parts:

Don’t get me wrong… gravity systems have been in the ground for decades, and many of them are still operating well. However, this industry is all about learning. We now know that pressure distribution is much more efficient, and in my opinion, a superior method of treatment.